The first time my wife and I visited South Africa, we fell in love with the country. During our visit, we drove to a small town called Oudtshoorn, which is about five hours east of Cape Town. The town is world famous for its Ostrich Farms. We stayed at a B&B and ate at some of the local restaurants. This is the first time, I had an Ostrich Steak. 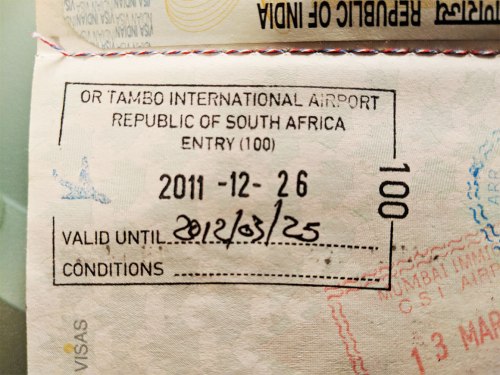 Next day, we drove the Cango Ostrich Farm, which is by far the largest and most popular of all Ostrich Farms in the area. We signed up for The Ostrich Tour. The tour goes in small groups with a professional guide and is an easy walk through the farm. During the tour, we saw Ostrich eggs, Incubators where the eggs hatch and we were also to see some chicks hatch out as we were at the farm during the right season. Next, we walked to an area, where they gave us a bucket of feed and we could feed the Ostrich Birds. While you are feeding the birds, you also get a neck massage. As you can see in the picture below, I am holding the bucket of feed and three birds are rubbing their necks against my shoulder, giving me a massage and at the same time eating feed out of the bucket.

After the feeding and massage session, we were taken to another area, where there were about 30 birds running around in an enclosure. This is where you can ride a bird, provided you are below 80 kgs (176 lbs). At the time, I was 282 lbs, so they did not allow me to ride the bird. However, as you can see in the picture above, my wife has no problem. She also rubbed it in, that because I am overweight, I would not ride the Ostrich.

After the bird ride, we were walking back to where the tour started. The tour guide came up to me and pointed at a small hut. He took me there.  Under the hut, there were a few real ostrich eggs. He told me to go stand on them. At first, I was a little reluctant; I mean, what if those eggs cracked?  Well, he said, given I was not allowed to ride an Ostrich, I can go and stand on the eggs for a picture. He assured me that they will not break. I went and stood on them as you can see in the picture above. Apparently, Ostrich eggs can withstand weights up to 300 lbs.

It was overall a great experience visiting an Ostrich Farm. However, I do want to go back and ride the Ostrich, now that I fit the weight limit criteria

View all posts by mysuperbodytransformation